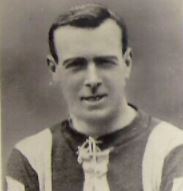 Billeted in Southport as a member of the 7th Manchesters, Arthur Potts is recorded as having played three games for Southport Central in the 1915/16 season scoring three goals, a hat-trick on his debut away to Bolton in a 7-0 win.

Prior to the war Potts had played for Manchester United having joined them from Willenhall Swifts in May 1913. He returned to Manchester United after the war before leaving them in June 1920 to join Wolves for a fee of £100. His highlight in the Black Country would have been in 1921 when Wolves, then a second division club played Spurs at Stamford Bridge in the FA Cup Final, Spurs winning 1-0.

In the summer of 1923 Arthur left Wolves for a brief spell at Walsall followed by spells at Bloxwich Strollers and Dudley Town before retiring from football and becoming a publican in the Midlands.
(Profile by Mark Iddon)