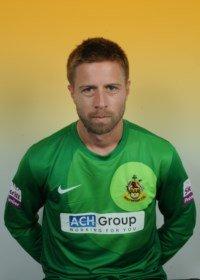 Born in Manchester, Danny began his career as a junior with Bolton wanderers and also had a brief spell with Stockport County before joining Radcliffe Borough in 2000. He quickly established himself as first choice keeper and was a regular in the first team until 2005 when he joined Fleetwood Town. Again he quickly became first choice and was a regular as they worked their way through the then UniBond League, into Blue Square Bet North and then Blue Square Bet Premier making 163 appearances for them in total. He was released at the end of the 2010-11 season and joined Barrow in July 2011. After a season full-time with Barrow he joined the Sandgrounders following Barrow's relegation and became Alan Wright's first signing.
Following an impressive season Hurst became a hit with the Southport fans but wanting to remain part time he was placed on the transfer list by Martin Foyle.
Shortly afterwards he rejoined Stockport County.