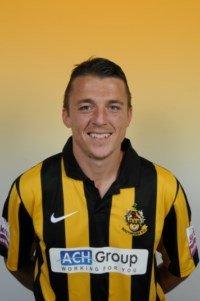 Started his career with Everton in their youth system, before moving on to Bristol City. After three years with City, he transferred to Cheltenham Town in 2007. Two years later he spent a brief spell with Port Vale, before signing for Morecambe in 2010. After a brief spell with Fleetwood Town, he signed with York City in January 2012. He played for York in the victorious 2012 Conference Premier play-off Final at Wembley Stadium, which saw the club promoted to League Two. He had a brief spell at Macclesfield Town in August 2012, before joining Chester the following month. He helped Chester to win both the Conference North title and the Cheshire Senior Cup in the 2012�13 season before joining Southport for the start of the following season.