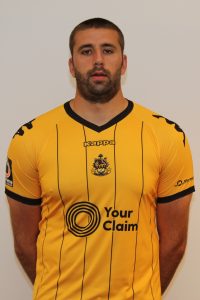 The 24-year-old central defender joined Southport FC at the start of the 2018-19 season and made 28 league starts and he also won the the Champion Newspapers Player Of The Year. His no nonsense style saw him become a big favourite with the Southport fans.

The towering 6″4 centre-half spent his junior years at Tranmere Rovers and Chester City before joining Wigan Athletic on a scholarship as a 16-year-old in 2010. In his second year Ryan became captain of the Wigan Athletic U18 side and made several appearances for the reserve side. Ryan then moved into Welsh football, joining Buckley Town and then Rhyl, where he won Manager’s Player of the Year and Player’s Player of the Year. Following a stint at Northwich Victoria, Ryan joined Chester in January 2016, and has since made over 100 appearances for the Blues.