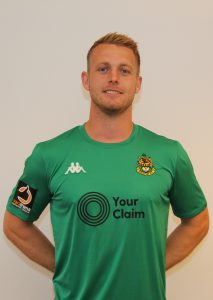 Dan Hanford was a regular feature between the sticks for Southport FC in 2018-19 and won the coveted Supporters Player Of The Year Trophy whilst also becoming the first player since 2010 to be ever present in the Southport jersey. The Welshman joined the club in the summer of 2018 on a free transfer.

Dan provided great experience in goal, having previously played for Carlisle, for whom he made 27 EFL appearances. The 28-year-old came through the youth ranks at Swansea City, before moving on to Clitheroe. Throughout his career he has enjoyed spells in both Spain and Malta but has predominantly featured in the National League with Hereford and Gateshead.

Internationally he has represented Wales at both U17 and U19 level.