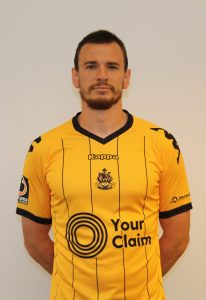 After coming through the youth ranks at Blackburn Rovers, Dean spent enjoyed a seven-year period at Accrington Stanley. During his time at the Wham Stadium, Dean acted as captain on a few occasions, before heading to Lancashire rivals Morecambe. Following his two years with the Shrimps, the centre back joined Liam Watson’s side, taking on a coaching role alongside his playing duties.