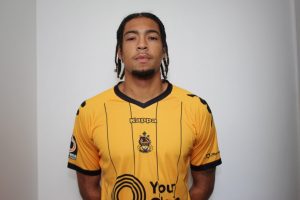 Marcus spent six months on loan with the Port from Bolton Wanderers during 2018-19 making a big impression with his strong midfield performances, before penning a permanent contract at the Pure Stadium in October 2019.

He spent the start of the 2019-20 season with Bradford (Park Avenue) after being released by Bolton. Prior to his time with Bolton he was a youth player at Manchester City, representing England at U18 and U19 level.