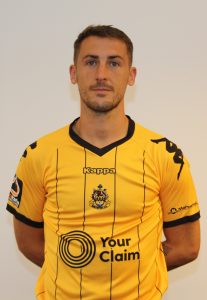 Paddy returned to Southport for his second spell at the club at the start of 2019.

The midfielder had previously served the Sandgrounders in 2011, joining the club on loan from Bradford City but never making a start for the club in this period. After a further loan to Vauxhall Motors, the 26-year-old enjoyed permanent moves to Droylsden, Altrincham and Barrow. His biggest move came in 2016, when he joined EFL side Accrington Stanley, making his debut against Burnley in the League Cup. Paddy’s first goal for Stanley came a month later in a 1-0 victory over Portsmouth. In January 2019, Paddy rejoined Southport and he added another option to Liam Watson’s side