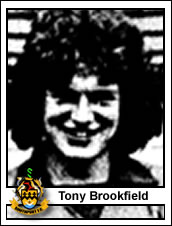 His actual League baptism for Southport came when he replaced Cliff Marshall for the last 18 minutes at Bradford City to become one of Southport's youngest ever players, being 2 months short of his 18th birthday. His only Football Legue goal was Southport's second in a 2-2 draw against eventual champions, Watford. He also had two brief spells at Haig Avenue in the Northern Premier League as well as turning out for a number of local non-League clubs, notably assisting Runcorn to win the NPL Cup in 198o and having 3 separate spells at Formby. In 1994 he was the last player from the Football League days to be playing competitively. Since joining the Civil Service in 1978, he has represented the Merseyside Civil Service football side and latterly the North West Health and Social Security Representative side from 1978-94.