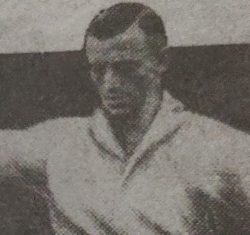 Bob captained the Westhoughton schools team at 13 and played for Horwich RMI, Blackrod and Westhoughton Collieries prior to signing for Bury as a junior. Working part-time as a roofer alongside his Bury commitments he was a regular reserve before breaking into the first team shortly before the outbreak of war.
His football career was interrupted when he joined the Royal Navy in 1940. Upon his release November 1945 he made a series of guest appearances for the Sandgrounders.

In 1956 he embarked on a second career as a publican and became landlord of several pubs in and around Bolton, near to his Westhoughton home.

We are grateful to Grandson Matthew Hunter for sharing with us the photographs and news clippings kept by his family and for his permission in publishing them.