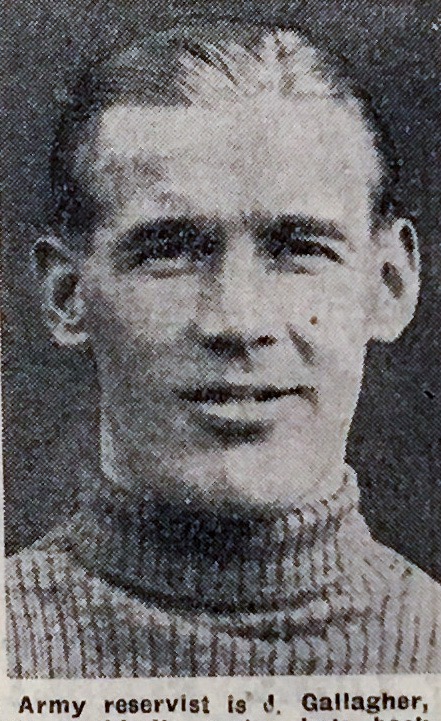 He had commenced his career with his home town club, Bury, signing professional for them in January 1936. he didn’t feature in any league matches for them and was transferred to Notts County in August 1937, where he went on to play in 23 matches, scoring two goals.

Moving to Exeter City in June 1939, the season came to an abrupt end due to the Second World War. He guested for Southport fairly regularly.

A Grenadier Guards Reservist, Gallagher was undertaking military training at Pirbright Camp near Aldershot when he signed for City. During WW2 he joined the Coldstream Guards.

After the War he went into coaching back at Notts County, before rejoining Exeter in September 1948 when he became the club trainer, a position he held until May 1953 when he left by mutual consent. He then had offers from both Stoke City and Southampton.

He had a joint benefit match with Stan Cutting in May 1950 when Exeter City played Leicester City. Gallagher died at his Southampton home in December 1972.