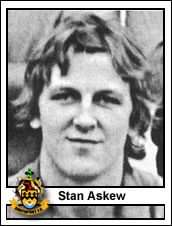 Stan Askew moved from the Dingle to Halewood at the age of 7 and played for Halewood Grange Comprehensive School along with Barry Wellings who was to represent Southport in the N.P.L. Though invited to Everton for training at 15 there were no available places for more apprentices so in 1974 he applied to Southport for a trial and stayed three and a half years. In 1975-76 he was with Paul Birchall (q.v.) in the Lancashire Youth Side which beat Westmorland before going out to Northumberland. His first important game came as sub in the Past v. Present match in April 1976 and on 14 August he came on for the final 9 minutes as sub for Keith Galley in the Carlisle United F.L. Cup-tie. After a disagreement with Harry McNally he joined New Brighton under Jimmy Butler and, after a season with Christleton, followed him to Heswall for 2 years. He
represented a number of Merseyside Clubs until returning to Southport briefly in January 1989 when he subbed for Carl Lancashire at South Liverpool — 4,540 days after his previous appearance!
He still lives in Halewood where he represented Halewood Labour for several seasons in the Sunday
League.