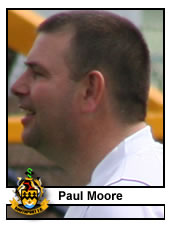 What can you say about Paul Moore that hasn\\\'t been said already. A larger than life, lovable rogue who returned to the club in 2007/08 after a spell out of football to assist and help out as goalkeeper coach and latterly was assisting Gary Brabin when Peter Davenport was dismissed and Huw Griffiths departed. Brought some much needed fun back to the dressing room in 2007/08 and gave everyone a lift. Moorsy made 134 appearances between December 1990 and the end of the 1993/94 season. He kept a clean sheet on his debut against Matlock. Was inclined to have the odd disagreement with the referee and is well remembered for his ref rage at Accrington when a blatant handball led to a goal against him and resulted in a sending off which cost him an ever present record in the 1992/93 promotion season. When you ask most players what there most memorable moments are in football they say winning a league or cup. Moorsy? Getting the sending off in that match at Accrington!!
Joined the club from Alvechurch, he was and still is a great club man who is immortalised for his song of allegiance to the club at the 1992/93 Player of the Year night.
Player Profile reproduced with Permission from:
The Complete Non-League History of Southport Football Club 1978 - 2008, by Trust in Yellow (Legends Publishing, 2008). ISBN 978-1-906796-01-3


If you can provide any further information please contact me
Season: 1993/1994 [Back to Player Stats]
The player made an appearance in the following games: