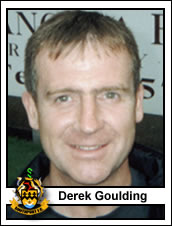 A tough uncompromising centre half Derek played for Everton, Altrincham, Stafford Rangers, Oswestry, Bangor City and Chorley before joining Southport where he played 132 games plus one as sub and got on the score sheet 6 times. Signed for the 92/93 season Goulding made a super start to the season before a bad knee injury required surgery and he missed 16 games before returning to finish the season off in grand style. Since leaving Southport Derek has become a fully qualified UEFA A License coach and managed Burscough for three years. At the time of speaking to him Derek was waiting on his next management opportunity to enable him to continue his managerial career and what an opportunity came his way just days after speaking to him, the job at AFC Liverpool, good luck with that one Derek. His overriding memories of his time at Southport were �winning trophies (quite a few), big Non League crowds and competing at the top end of the Conference, happy days indeed�. Whilst at the club Derek worked as a self employed plasterer. He was brought to the club by Brian Kettle and released by Billy Ayre which was a huge disappointment to him. He has lots of great memories of his time at the club but like a lot of the players we spoke to, he thinks they are unsuitable for publication. We do wonder just what used to go on with these footballers! A footnote from Derek�s wife, �Derek�s best memory should be that his daughter Rachel was born 16 April 1993 the day before we won the title at Emley�, the whole bus rang her in hospital and it sounded like a very enjoyable journey home. Funnily enough she didn�t see Derek that Saturday for some reason. The following Saturday she surprised Derek by bringing Rachel on her first trip out in the car to watch him play, I�m sure she doesn�t remember too much of it though.
AFC Liverpool unveil their new manager From The Liverpool Echo 3 May 2008
New Non-League club AFC Liverpool today unveiled their new manager .Former Southport and Bangor City centre back Derek Goulding was the man chosen to lead the amateur outfit. The 45-year-old is a licensed coach who famously masterminded Burscough FC�s giantkilling win over Gillingham in the 2005 FA Cup. He told the ECHO: �I am delighted to be the first ever manager of AFC Liverpool as this is a club with enormous potential. I have been a Liverpool fan all of my life and I can\'t wait to build this team. I have been successful as a player and as a manager and I am looking forward to bringing that approach to AFC Liverpool�. Club spokesman Alun Parry said: �Derek is a very experienced coach and manager. He has managed at a level three leagues above us and outwitted Football League clubs. In Non-League terms, this is a coup equivalent to a League Two side appointing the likes of Martin O\'Neill or Harry Redknapp. �Goulding has well-established contacts on the non-league scene and is promising to attract at least one other A Licensed coach to his staff. The team was set up for fans fed-up with rising Premiership ticket prices. So far around 1,000 people have pledged cash to the project. AFC Liverpool are close to sealing a place in the Vodkat League after getting the non-league approval a few weeks ago. The club hopes to have youth teams, a women\'s team, junior girls teams and a disability team too. AFC Liverpool will be run as an Industrial & Provident Society.