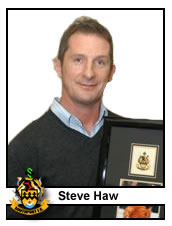 Before joining the Sandgrounders, Steve played for Altrincham, Wigan, Kirkby Town and Marine from where Brian Kettle brought him to the club eight games in to the 1992/93 season. Often described as the best ever signing in our Non League days, Steve went on to net 31 goals in the season or 32 if you read some reports. The own goal factor coming in to play again.
On leaving the club Steve had a spell as player manager at Accrington Stanley and played for Hyde United and Witton Albion.
Steve has been the England Fire Service football coach for four years and despite a dreadful work related accident he continues to work as a Station Officer for Merseyside Fire and Rescue Service.
Steve was released by Paul Futcher having made a total of 131 appearances scoring 63 goals along the way, second only to David Gamble.
A fall out at Marine brought Steve to Haig Ave for a bargain £500 and he was Brian Kettle’s first major signing of the season. Always a prolific scorer Steve scored the only goal for Marine in March 1986 which secured the points at Haig Avenue. Nicknamed Chivers, Steve has assured himself of a place in the all time legends Hall of Fame.
1992/93 was a remarkable season, beating Liverpool keeper Bruce Grobbelar, a brace on his debut and four hat-tricks to his name were his goalscoring highlights but the actual winning of the championship was THE most memorable moment. He enjoyed being part of a fantastic bunch of lads and the winning of the league and cups along the way and playing for some great managers made his stay at Southport a thoroughly enjoyable one. Steve’s glut of goals had the scouts flocking to Haig Avenue and whilst he thought it was great that clubs were interested he was happy to ply his trade at Southport as long as the club were happy with him and of that there was never any doubt.
Player Profile reproduced with Permission from:
The Complete Non-League History of Southport Football Club 1978 – 2008, by Trust in Yellow (Legends Publishing, 2008). ISBN 978-1-906796-01-3