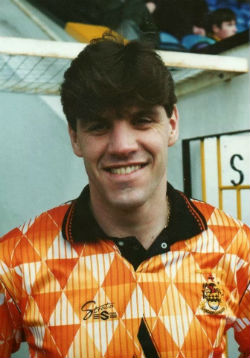 Born in Southport, Comstive was to spend the vast majority of his career in the north-west of England, beginning as an apprentice at Blackburn Rovers in October 1979. He went on to make six league appearances for Rovers, with two loan spells with Rochdale following before a move to Wigan Athletic in August 1983.
After a three year stint with Wrexham from 1984 to 1987, Comstive made an Ł8,000 switch to Burnley. This spell saw him play at Wembley Stadium in the 1987–88 Sherpa Van Trophy final against Wolverhampton Wanderers.
Comstive moved on again in 1989 to Bolton Wanderers for Ł37,000, with his two seasons at Burnden Park ending in losses in the Third Division play–offs. Two of the three goals he scored for Bolton came direct from corner kicks in the 4-1 home win against Bournemouth in January 1991. In November 1991 Comstive moved to Chester City for Ł10,000. He scored in the first Football League match at the Deva Stadium between Chester and Burnley on 5 September 1992 but was released at the end of the 1992–93 season. Many of his appearances for Chester came at full back.
This marked the end of Comstive's professional career. He joined hometown club Southport and went on to play for fellow non-league clubs Morecambe and Chorley. Comstive later had a short spell on the coaching staff at Southport and also worked for Burscough. He also worked at Fleetwood Hesketh FC, assisted by "Bill and Ben", aka Alan Francis and Dave Massam.
On 29 December 2013, he died suddenly following a heart attack