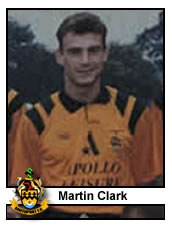 Up until his departure in the summer of 2003, Clarky held the distinction of having played for every single manager since the club joined the Conference ten years earlier. What makes it even more remarkable is that he had a two year spell at Rotherham between 1997 and 1999.
Born in Accrington, he began his footballing career as an apprentice with Preston North End. After his release in 1989 Martin moved to Lancaster City and played over 140 games before joining his home town club Accrington Stanley. Clark’s impressive performance for Accrington in an FA Cup tie against Crewe Alexandra in 1991 did enough to persuade the Alex to sign him but with limited opportunities he dropped out of the League and joined the Sandgrounders at the start of their second season in the Conference.
A postman in the day, he originally signed as a right full back and spent most of his Southport career on the right hand side of either defence or midfield. Clarky went on to play a part in 250 games for the Sandgrounders, scoring 9 goals.
Ronnie Moore took over the Haig Avenue hotseat during the 96-97 season and Clarky found a new lease of life in the role of sweeper. Arguably at that time he was at his finest for the Sandgrounders. His performances persuaded Moore to take him to Rotherham after the ex Tranmere man left after just one year in charge.
His time at Millmoor was frustrating for Clarky, never really given the opportunity to establish himself in the team and ultimately never realising the potential that had seen him return to the Football League. After just 30 appearances he returned to Southport two years later. He picked up where he had left off for the Sandgrounders and before long earned himself a call up to the England semi-professional team, where he would play alongside four other “100 club members”. Chris Lane and Steve Dickinson joined him in the squad from Southport, with Tim Ryan, who had signed for Doncaster Rovers and Steve Pickford, who was yet to join the Sandgrounders making up the quartet. Clarky would at some point play with all four whilst at Southport (although not all at the same time). For such a servant to the club it was unfortunate that he missed out on Southport’s Wembley trip which came at the end of his first season at Rotherham.
During his last season with Southport he was part of the side that defeated Notts County 4-2 in the FA Cup in front of the Match of the Day cameras. The euphoria surrounding the cup giant-killing quickly subsided however as Southport slumped to a series of disappointing defeats. Manager Phil Wilson was relieved of duty before the end of the season and relegation was confirmed from the Conference at Stevenage on the last day of the campaign. Eight years of outstanding service over a 10 year period ended in heartache and Clark was visibly moved by the club’s plight. Little did he or the travelling supporters know that this would be the last time they would see him in a Southport shirt.
The close season shake up by new manager Mike Walsh wielded a number of surprises, non bigger than the decision not to include stalwart Clark amongst his retained list.
Replacing Southport in the Conference were Accrington Stanley, and Clark sought solace in familiar surroundings, joining the East Lancashire side during pre-season.
Clark’s return to the Reds however didn’t last long and he teamed up with another former Sandgrounder, Derek Goulding upon his managerial appointment at FA Trophy winners Burscough in October 2003.
With the Burscough move not working out Clark re-joined Phil Wilson in February 2004, but with the Dolly Blues facing financial crisis and budget cuts he was forced to leave early in the pre-season of the 2005/06 season, during what Wilson has since described as his most difficult night in football.
Clark signed for Chorley and after a very successful first season for the club moved into a player/coach role in September 2006 when former Southport team mate Paul Lodge took the managerial reigns at Victory Park. Picking up the players player of the year vote two years running, Clark was made team captain, has been installed as caretaker manager on more than one occasion and has racked up over 100 appearances under a number of different managers and in a very short space of time. A favourite wherever he goes, he will always be welcomed back at Haig Avenue.

The following was published on Port Online in 1997

Martin Clark very kindly spared a few minutes, before training last week to give us an insight into his life, likes and dislikes. Martin of course played for us in our earlier Conference days and made his debut back in August 1994, going on to play exactly 100 Conference games and another 36 cup games. During that time he netted 10 goals from his right-back or sweeper position and left us along with manager Ronnie Moore for a spell at Rotherham United.
MARTIN ALAN CLARK was born on September 12th 1970 in Accrington, the place where he still lives with his parents. Clarky (as he is known in the dressing room) is however engaged to Nicola and is aiming to buy a house at some point in the near future. His car at the moment is a Ford Mondeo.
I asked Martin if he has any particular friends in the game and after a bit of thought, he commented that he didn’t have any he could say were particular friends, but he felt that all players and managers in the game should really be friends. A Liverpool supporter through and through, Martin inevitably names Anfield as his favourite ground and his boyhood hero was Liverpool ace Terry McDermott. As for his all-time favourite footballer not a Liverpool player this time but Argentinian ace Maradonna – because he had everything, says Martin – including an invisible hand! Martin states that his proudest moment in the game was re-signing for Southport (!), but added it was matched when he turned professional. His most memorable game played in was his League debut for Rotherham against Barnet, but unfortunately they lost 3-2 and Martin was given a dreadful run-around by a Barnet striker – perhaps memorable for all the wrong reasons. His biggest disappointment in the game came when Rotherham released him at the end of last season. Clarky’s parents, Alan and Betty, who follow him around to watch all over and are popular characters themselves in the Grandstand club bar, are his biggest influence in his career. His most difficult opponent was Macclesfield Town’s Stuart Whittaker and his ambition is to play as long as possible. Moving to his personal life, and musical tastes – no hesitation here from Martin, Oasis without any doubt are his favourite musicians. However, his favourite song is not an Oasis song but Bohemian Rhapsody by Queen. Not one favourite actor for Clarky – but two! Laurel and Hardy – “who just can’t be touched – they’re brilliant” and as for favourite actress – the Welsh lass and Darling Buds of May star Catherine Zeta Jones is his fave. As for television – well he doesn’t watch too much but Friends stands out as quality viewing. When he does get some spare time Martin likes reading fantasy books such as Tolkien’s the Hobbit, Silmarillion etc. His favourite holiday destination is Ayia Napa in Cyprus (is that where Tim Ryan’s appendix got left behind?!!) When it comes to eating it has to be Chinese food for Clarky, washed down by Jack Daniels. As for an enjoyable night out – on the town in Accrington will do for him! If he wins the lottery the first thing he would do is buy a house and his life-time ambition is just to be happy. His pet hates, Clarky’s are smoking and ignorant people and his pride and joy? Life itself!