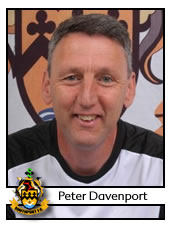 Peter Davenport first joined Southport in 1996 as a player, but more recently held the managers post at Haig Avenue between January 2007 and April 2008.
As a youngster, whilst playing for West Cheshire Boys, Davenport trialled with Everton. Disheartened after his first rejection, and with the help of his brother, he wrote to a number of First Division clubs asking for trials. Nottingham Forest spotted the Birkenhead born striker playing for West Cheshire Boys and offered them a brand new football kit if they could sign him, to which they agreed.
Taken under his wing by Brian Clough he was moulded into one of the top strikers in the country. Living out of digs overlooking the ground itself, he made his debut for the European champions in 1981. Davenport went on to reach the UEFA Cup Semi final with Forest and also picked up an England cap against the Republic of Ireland at Wembley in 1985.
In an interview with the Lancashire Evening Post in 2007, Davenport recalls his England experience with a mixture of fondness and disappointment:
\"I was sitting five or six rows back at Wembley and didn\'t have a good view of the game at all,\" recalled Davenport. I was wondering whether I\'d get on the field at all. Anyway, I eventually started warming up and Mark Hateley got injured.
\"Bobby Robson, the England manager, turned to Don Howe and said, \'We better send on the boy Devonshire\', who was a midfield player.
\"Don said to him, \'Don\'t you mean Davenport?\'.
\"I\'ve got a video of the game and you can clearly lip-read Bobby getting my name wrong!
Alan Devonshire was not even in the squad.
\"But I came on and set up a goal for Gary Lineker, and that was nice.
\"I just felt so incredibly proud, like I had reached the pinnacle really. My international future looked rosy. I had even been measured for my suit to go on the summer tour to Mexico, a trial run for the 1986 World Cup.
\"Then I tore my hamstring at Ipswich the weekend after I played for England. I remember sat on the treatment table at the City Ground and Brian Clough walked in. A couple of minutes later, the telephone rang out and it was Bobby Robson. Brian said, \'Now then young Robert, what can I do for you?\' � Cloughie did call everybody young man � \'Sorry young Robert\', he said, \'Mr Davenport has ripped his hamstring and he will not be fit for the tour\'.
\"By the time I got back other players like Peter Beardsley were emerging and that was my only opportunity.\"
There aren\'t many strikers who can boast being top scorer for both Brian Clough and Sir Alex Ferguson in successive seasons but Davenport accomplished that when he signed for Manchester United in 1986.
It had been Ron Atkinson who had originally tempted Davenport to Old Trafford but within weeks �Big Ron� had found himself out of a job. In Stepped Alex Ferguson, fresh from breaking the Old Firm stranglehold on the Scottish title with Aberdeen. A second placed finish for Utd in the 1987/88 season was masked by the roaring success of rivals Liverpool and Ferguson came perilously close to the chop himself. It took him seven seasons to win the title, but by then Davenport was long gone.
Signing for Middlesbrough in the 1988-89 season, Davenport left behind a mixed backing from United supporters, despite the leading goalscorer tag. Originally having signed as a replacement for Mark \"Sparky\" Hughes, fans drew comparisons and when Sparky returned from Barcelona, Davenport\'s days were numbered. When you look at Old Trafford heroes such as Eric Cantona, they didn\'t score many more goals than Davenport but a background of years in the wilderness for a club the size of Man Utd carried a lot of weight.

After an unsuccessful year at Middlesborough, and rumoured fall-outs with hero Bernie Slaven, Davenport signed for nearby Sunderland. Although relegated at the end of his first season Davenport was one of the club\'s star performers. In the 1991/92 season Sunderland surprisingly reached the FA Cup Final where they met Liverpool, Davenport\'s second time at Wembley but his only appearance in a major cup final.
Upon leaving Sunderland he headed further North with spells at Airdrieonians & St. Johnstone in Scotland. Returning to English football in 1995 he briefly joined Stockport County before signing for Billy Ayre\'s Sandgrounders in time for the start of the 1996/97 season. As a player he scored 18 goals in 49 first class appearances, forming an effective partnership with goal machine Andy Whittaker.
It was his experience and background in the game that saw him promoted to caretaker manager following the sacking of Steve Joel the following season. After a brief spell in charge he was overlooked when Ronnie Moore was appointed full time manager amidst much fanfare.
Unhappy, Davenport left the club and joined Macclesfield Town as a player, helping the Cheshire club to clinch the Conference title and promotion to the Football League. Always regretful that he hadn\'t been given the chance to manage Southport on a more permanent basis, it was with Macclesfield that Davenport managed to score his 100th Football League goal, something which he is immensely proud of.
Davenport was eventually handed a management job of his own when Sammy McIlroy left Macclesfield, but after refusing to work alongside newly appointed joint manager Gil Prescott, he was relieved of duty in December 2000.
After six months out of the game, Davenport joined Bangor City in June 2001. The Welsh Premiership offered �Dav� a fresh challenge, totally different to anything he had experienced so far in his career. He took his side to two third place finishes and even took them to victory in Europe through the Intertoto Cup, beating Sartid (including a number of Yugoslavian internationals) 1-0 in 2002. After a disappointing start to 2005-06 season, Davenport resigned.
Davenport spent six months at Unibond Division 1 side Colwyn Bay before resigning to rejoin Southport as full-time manager following the earlier sacking of Paul Cook. Having originally contacted the club to enquire about loan players for his Colwyn Bay side, he was persuaded to apply for the post by Chief Executive Haydn Preece. Handed the role following the FA Trophy exit at the hands of Salisbury City, Alan Lewer having missed out on the post himself, was given the assistant manager�s role. This didn�t sit favourably with the new manager, preferring to bring in his own staff and within days Lewer was gone.
Faced with an almost impossible task Davenport\'s new side were marooned at the foot of the Conference table with little chance of survival. After making a number of changes, results started to improve and a six game winning run-in towards the end of the season almost saw them dramatically survive the drop into the Conference North.
A disputed penalty at home to York City, in front of the highest home league crowd in 33 years, put an end to any hopes that they had and Southport slipped away into the Conference North.
Having made the transition only one year before, Southport took the decision to remain full time and at a hastily arranged meeting following the last day defeat at Exeter City, Davenport agreed a budget with which he felt he could achieve promotion. Slender as it was, it enabled Southport to remain full time and be one of only two clubs in the division who could claim professional status.
The 2007/2008 season started reasonably well and Southport were riding high for much of the campaign. With the early season form sides dropping away Southport remained firm and looked the only side capable of beating runaway league leaders Kettering Town heading into February and March.
Davenport�s side were unable to maintain their momentum however and after an away defeat at the hands of the eventual champions, results and form started to slip away. Southport dropped out of the play-off places altogether and after an abysmal away performance at Solihull Moors in April 2008, Davenport and his assistant manager Huw Griffiths were sacked.
Gary Brabin, quickly appointed as his successor, guided Southport back into the play offs with five victories from their remaining six games before missing out on penalties to Stalybridge Celtic in the semi-final.
In the days following his departure Davenport, clearly angry about his dismissal, undertook a series of newspaper interviews in which he claimed that the man largely responsible for bringing him to the club in the first place, club Chief Executive Haydn Preece, had \"stabbed him in the back�.