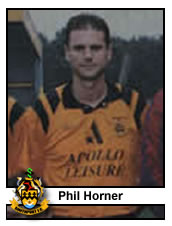 A central defender. Like Ian Baines Phil just qualifies for the 100 Club playing exactly 100 times and scoring 6 goals. Also played for Leicester, Rotherham, Halifax and Blackpool and made one appearance for England’s Youth team. Phil is now a Member of both the Chartered Society of Physiotherapists and the council of Professional Supplementary Medicine and is the first team physio at Blackpool FC.
He started out as an apprentice at Leicester City and made 7 appearances in the 1986/87 season having spent three games on loan with Rotherham. A move to Halifax saw Phil make 70 appearances scoring 4 times before he made his home at Blackpool where he went on to make 184 appearances and score 22 times between the 1990/91 to 1994/95 seasons. Upon finishing his professional playing career Phil studied for his BSc Hons Degree in physiotherapy whilst with Southport. Upon completing his degree Phil worked as a physio at Preston Royal Infirmary before returning to Bloomfield Road in his new capacity as club physio.
Player Profile reproduced with Permission from:
The Complete Non-League History of Southport Football Club 1978 - 2008, by Trust in Yellow (Legends Publishing, 2008). ISBN 978-1-906796-01-3