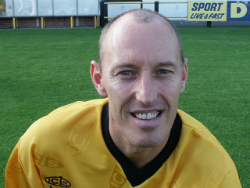 Whittaker joined Bamber Bridge (of the North West Counties League Second Division) from District football scoring his first goal as a semi-pro in October 1990. Making a jump two steps up the pyramid he joined Netherfield at the start of the 1992-93 season. Scoring over 60 goals in a two season spell in the Northern Premier League First Division he attracted the attention of Barrow of the Northern Premier League. Another 36 goals later and Billy Ayre brought the hot shot to Haig Avenue.

As a teenager I had number 8 printed on my shirt as homage to the man that in 151 appearances for the Sandgrounders scored 71 goals in the mid 1990s. Andy Whittaker was one of the most prolific marksmen in non-league football and became a firm fan favourite during his