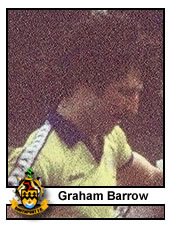 Barrow first entered the Football League at the relatively late age of 27 in 1981 when he signed for Wigan Athletic from Altrincham, having earlier played for Chorley and Southport. He became a vital part of manager Larry Lloyd's promotion winning side, playing as a hard man in midfield, and further endeared himself to Wigan fans by putting in a man of the match performance in the Freight Rover Trophy final at Wembley Stadium in 1985 despite playing in the unfamiliar position of forward. He left the club for Chester City in 1986 for Ł6,000, after 212 appearances in all competitions for the Latics (179 games, 36 goals in the League).

Barrow had a difficult start at Chester, suffering five bookings in his first seven games, and in November 1986 he considered a move to Blackpool. But he opted to stay with the Blues and went on to make 298 first team appearances over the next eight years, mainly as captain. He combined his playing role with an assistant manager position to Harry McNally from 1988–89 onwards. On the final day of the 1991–92 season, Barrow scored a late winner in Chester's final home game at Moss Rose against Leyton Orient to seal Division Three survival for the club.

Barrow began his managerial career with Chester City in 1992 (as player–manager), after collecting seven points from four games in caretaker charge. Although the team was relegated to the Football League Third Division in 1993, Barrow inspired the Blues to bounce back the next season and gain promotion, but he resigned in the summer of 1994 amid frustration at key players leaving and a lack of financial backing from the board.[5] He retired from playing following his departure, with his final appearance being in Chester's win 3–2 win over Preston North End on 2 April 1994, just two months before his 40th birthday.

He returned to Wigan as manager early in 1994–95 and rescued the Latics from relegation to the Football Conference. He was in charge of Rochdale from 1996 to 1999, although the club failed to gain any success and he left after a third successive bottom half placing. A spell as assistant–manager at Notts County followed before returning to Chester as manager on 31 May 2000, shortly after their relegation to the Nationwide Conference. Barrow was forced to work in difficult circumstances under American owner Terry Smith, who suspended Barrow's assistant Paul Beesley from playing for failing to stand in the correct position at a set piece and banned Barrow from speaking to the press without his permission. Although Chester finished well out of the promotion race in eighth position, Barrow managed to guide Chester to an FA Cup third round tie with Blackburn Rovers after eliminating Football League sides Plymouth Argyle and Oxford United. He also led them to the FA Trophy semi–finals and victory in the final of the Nationwide Variety Club Trophy, with the players saying he had "single-handedly put Chester back on the football map". Despite his cup successes, Barrow was sacked in June 2001, a move largely unpopular with supporters.

He was manager of Bury, from January 2004 after a spell as assistant-manager to Andy Preece. However the club did not progress satisfactorily and as a result Barrow was dismissed in September 2005. He returned to Chester at the end of the season, becoming assistant to manager Mark Wright. They were sacked together on 29 April 2007. He returned to working in football the following January, when he continued his trend of going back to former clubs in north-west England by becoming assistant–manager to Graham Heathcote at Altrincham.

Barrow is scheduled to have a testimonial at Chester in the near-future, as a reward for his long service to the club. This came after he rejected an approach to become assistant manager at Swansea City in February 2007.
Player Profile reproduced with Permission from:
The Complete Non-League History of Southport Football Club 1978 - 2008, by Trust in Yellow (Legends Publishing, 2008). ISBN 978-1-906796-01-3


If you can provide any further information please contact me
Footnote: