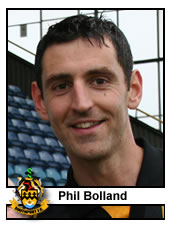 Ask any Southport supporter what the club’s biggest mistakes of the non-league era were and inevitably the name Phil Bolland will crop up. Not however because he was a bad signing. Quite the opposite in fact. Bolland was such a success that he ranks amongst the best defenders seen at the club during the Non-League era. The mistake came when he was allowed to leave the Sandgrounders without attracting a fee.
Bolland’s career had a stuttering start. Initially joining Altrincham in 1995, by the time he teamed up with Southport in September 1997 he had appearances at three other clubs under his belt, Salford, Trafford and Knowsley United. Fortunately for Southport his potential hadn’t been spotted by any of these clubs and Bolland joined Southport at a time when defensively they were spoiled for talent. Then manager Paul Futcher, at 41 years of age was still playing (and playing well) and Tim Ryan and Phil Horner provided Bolly with some real stiff competition (this was added to a year later with Australian Scott Guyett) yet between September 1997 and May 2001 he still managed to put in 121 appearances (including 7 as a substitute).
Bolland was part of two successful Southport teams during his four year stint. Futcher’s talented yet ultimately underachieving squad had against all odds managed to get to Wembley for the FA Trophy final in 1998. With Futcher electing to play himself beneath the Twin Towers, Bolland had to settle for a late cameo appearance as a substitute striker. At six foot four, it couldn’t be denied that his mere presence caused problems wherever he was. With the league form of the side suffering, Futcher was replaced by Mark Wright and Bolland became an integral part of the side that clinched 4th place in the Conference 3 years after the Wembley appearance.
Playing under both Futcher and Wright, he arguably learned from two of the best defenders of their time and Bolland left the Sandgrounders in May 2001 following Wright to Oxford United to pursue a Football League career. Highly rated by the two former international defenders it is no coincidence that Bolland has played for Mark Wright at all four of the clubs that he has managed (Southport, Oxford, Chester and Peterborough). Conspiracy theorists will say that Wright knew he would leave Haig Avenue and ran down Bolland’s contract in order to tempt the Liverpool born lad to his new club.
After 20 appearances Bolland’s time at Oxford was up and so too was manager Mark Wright’s for reasons covered elsewhere in this book. Wright ended up at Chester City tasked with guiding them back to the Football League following their exit to the Conference. Bolland followed his mentor and in his second year at the Deva Stadium picked up a Nationwide Conference championship medal in 2003/2004. In the summer of 2006 Wright moved to Peterborough. So too did Bolland - A pattern was emerging. Once again Wright’s tenure at his new club was short-lived and both Wright and Bolland switched back to Chester within months.
When Wright was dismissed from Chester with one game remaining of the 2006/2007 season, as club captain for the previous two seasons Bolland remained behind. Bobby Williamson took over but was keen to make changes to Wright’s team, clearly viewing Bolland as one of the players he wanted to move on. With only 3 appearances for the season he was eventually placed on the transfer list in December 2007. Although he attracted the interest once again of Southport where he had first begun to make his name, Bolland wished to remain in the Football League for as long as possible and secured himself a self professed “dream move” to Chester City’s great rivals Wrexham.
Player Profile reproduced with Permission from:
The Complete Non-League History of Southport Football Club 1978 - 2008, by Trust in Yellow (Legends Publishing, 2008). ISBN 978-1-906796-01-3