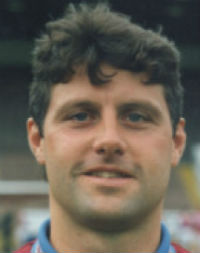 Deary began his career with Alan Ball's young Blackpool team in 1980. Unlike the rest, however, he went on to appear in over 300 games for the club. He started as an apprentice, signing for the Seasiders in March 1980. He made his debut on September 5, 1980, in a 2–1 victory at Fulham. The management seemed uncertain whether to play Deary in the heart of defence or deep in midfield, but he eventually established himself in the latter position.
Deary scored his first league goal on September 29, 1982, in a 2–1 victory at Chester City. The following season, 1983–84, he scored a hat-trick in a 3–1 victory over Hereford United at Bloomfield Road on April 28, 1984.
A tough tackler who enjoyed pushing forwards, Deary was Blackpool's top scorer during their 1984–85 promotion season, with fifteen goals in all competitions.
At the end of the 1988–89 season, Deary decided to move on, his place now coming under pressure. Blackpool's neighbours, Burnley, snapped him up for Ł30,000.
After six years at Turf Moor, Deary spent two years with Rochdale, before finishing his career with a short spell at Southport.