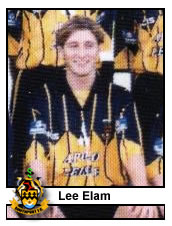 Bradford born Elam began his football journey as a centre forward. Working his way through local youth and club sides he signed signing schoolboy forms for the Bantams at the age of 13. Released at 17, disappointed, he drifted out of football altogether.
Persuaded to join a local Sunday league team by friends he was spotted and snapped up by Guiseley three years later.
With his close control and pace an asset, under the advice of management he switched to the right side of midfield, spending one and a half seasons with “the Lions” before stepping up into the Conference with Southport.
Still part time Lee made ends meet by helping with his fathers roofing business and working as a fitness instructor in a leisure centre near to his Yorkshire home.
Lee played in 108 league games for the Sandgrounders scoring 23 goals between November 1998 and April 2002. Deployed on either wing he was equally as effective. Elam was a real handful for any defence, quickly earning himself the nickname “Bestie” due to his trickery. The offer of full-time football up the coast at Morecambe however lured him away. He scored 14 goals that season, including the first in a 2-1 victory over second division Chesterfield in the FA Cup 1st round.
His form for Morecambe also earned him a call up to the England National Game squad.
Citing home-sickness as his reason, he left Morecambe and returned to Yorkshire, signing for Halifax Town at the start of the 2003-2004 season. After just 16 appearances however he was on the move again and this time he couldn’t have been much further from his roots. Initially joining on loan, he completed a Ł15,000 move to Yeovil Town.
Elam made only 12 football league appearances for Yeovil and saw out the season on loan at Chester City where he made a handful of appearances on route to claiming the Conference championship alongside former Southport team mates Scott Guyett and Phil Bolland.
At the end of the season Elam followed long time admirer Garry Hill to Conference South side Hornchurch. With their well publicise financial difficulties beginning to surface, Elam, along with much of the rest of the squad were allowed to leave. Elam joined Burton where he stayed for just one game before returning to Morecambe for the remainder of the season.
Released at the end of the season Lee joined Crawley Town at the start of 2005-2006. After making only 5 appearances for the “Red Devils” the call came again from Garry Hill, then manager of Weymouth where he finished the season as part of their Conference South championship side. The 2006-2007 season started with optimism for Elam, but by January Weymouth too were beginning to experience financial troubles, electing to place their entire squad on the transfer list to cut costs. After just 23 appearances, Elam was signed by near neighbours Exeter City on a free transfer. His first match for Exeter was against his former club Weymouth in which he scored a hat-trick. With Lee Elam part of the squad, Exeter clinched promotion back to the Football League in May 2008 with a 1-0 play off final victory over Cambridge United at Wembley.
Lee was a real crowd favourite at Haig Ave and was quick to applaud the travelling Southport fans at both Weymouth and Exeter, he got a rousing ovation when subbed at Exeter which took the Exeter fans a bit by surprise!

This is how Elam's signing was first reported by Port Online

Lee Elam has finally put pen to paper and has joined the Sandgrounders for an undisclosed fee. The young winger had attracted interest from other conference clubs, but as reported on Port Online and Dune FM, Paul Futcher agreed terms with the player on Friday and he signed prior to the home match against Kingstonian. Elam is a versatile midfield player and scored ten goals so this this season for his former club Guisely. He can play on either wing or just behind the front two. This signing is a much needed boost for Mr Futcher, who, despite talking to many players so far this season, has failed to sign the men he wanted.