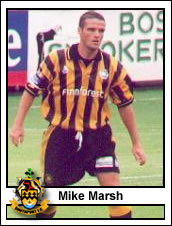 A midfield player or full back, he was spotted playing for his local side Kirkby Town by, then, Liverpool reserve team coach, Phil Thompson who advised manager Kenny Dalglish to sign the talented youngster, which he did on the 21 August 1987. Marsh made his Liverpool debut on the 1 March 1989 in the 2-0 win over Charlton Athletic at Anfield, when he came on as a 58th minute substitute for Jan Molby.

Marsh graduated from the reserves and established himself as a first-team regular in the 1991-92 season. His first goal also came during this season in one of the most memorable matches ever played at Anfield, on the 6 November 1991 in a UEFA Cup 2nd round 2nd leg tie against Auxerre. The game saw Liverpool turn a 2-0 deficit from the first leg in France into a 3-2 aggregate win. Marsh\'s 29th minute equaliser swung the game in Liverpool\'s favour.

Mike was an unused substitute in the 1992 FA Cup Final where he picked up a winners medal as Liverpool beat Sunderland 2-0. He continued to be a regular squad member in 1992-93, where he scored a great curled goal in a 5-0 win at Swindon Town, but Graeme Souness allowed him to leave in September 1993 when he joined West Ham United as a makeweight (along with David Burrows) in the deal that took Julian Dicks to Anfield. Marsh had appeared 101 times for Liverpool in which he scored six goals.

Marsh signed for West Ham on the 17 September \'93 and made his debut the following day in the 2-0 win over Blackburn Rovers at Ewood Park. Marsh\'s time at Upton Park was short-lived. He spent just fifteen months at the club, during which he made 61 appearances, scoring just twice.

Coventry City signed Marsh for �450,000 on the 30 December 1994 but he was soon on the move again after just nineteen games and two goals in six months at Highfield Road.

It was the manager who let him leave Liverpool, Graeme Souness, who wanted Marsh\'s signature and he got it for �500,000 on the 26 June 1995 taking Marsh to Turkish side Galatasaray. Marsh played just three times in two and a half months for the team from Istanbul before he was on the move yet again to Southend United whose newly installed manager was Marsh\'s ex-Liverpool team-mate Ronnie Whelan. He signed for the Shrimpers on the 3 September 1995 for £500,000. Marshy, as he was known by his team-mates, made his debut on the 9 September 1995 in the 1-0 defeat to Sunderland at Roker Park. Marsh had two good seasons at the Essex club, appearing in seventy-five league games in which he scored ten times. Unfortunately the second of these seasons saw Southend relegated to the 2nd Division, the third tier of English football. Things got worse for Marsh as he picked up a knee injury which ultimately and prematurely ended his professional career. He had played ninety seven times for Southend, scoring thirteen goals.

As part of the insurance payout he received when he retired he was required not to play league football again, so he spent the remainder of his playing days in the non-league game. The first non-league side he signed for was Barrow where he stayed six months before moving to the ambitious Midlands club Kidderminster Harriers on the 19 November 1999. Kidderminster were being managed by former Liverpool team-mate, and the man Marsh had replaced when making his debut, Jan M�lby.

The Harriers were in the Conference looking to gain league status for the first time in the clubs history. They achieved their dream by the end of Marsh\'s first season for the club, however, due to the terms of the insurance claim, Marsh couldn\'t follow M�lby and his team-mates into league football and had to leave after just twenty-four league appearances in which he hit the net four times.

Marsh joined Conference side Southport on a free transfer on the 18 May 2000 and spent just over a year there playing thirty seven times and scoring seven times.

On the 9 June 2001 he joined another ambitious Conference outfit, this time Boston United, who paid Southport �15,000. Marsh\'s experience helped guide Boston to the Conference title but once again he had to leave as he wasn\'t allowed to join his Boston team-mates in league football. He played seven times for Boston scoring just once but was a major influence within the Boston camp.

His last move was to another ambitious club, Accrington Stanley who were hoping that Marsh\'s magic for taking sides from non-league to league would rub off on them, which it did as Accrington won the Northern Premier League thus gaining promotion to the Conference. Marsh ended his career after just one season at the Crown Ground on the 2 June 2003.

After retiring from playing he was, until recently, on the coaching staff of Southport. In 2008, Northwich Victoria appointed him as their first-team coach. He quit Northwich, to become assistant manager at Bradford Park Avenue in November 2008. Later that month he was appointed caretaker manager of Park Avenue after Dave Cameron resigned following a defeat against bottom-placed Witton Albion; he shared the role with goalkeeping coach Gary Stokes because he had commitments in Spain.