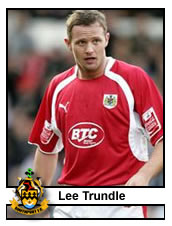 There has been the occasional player that goes on to make a name for themselves after leaving the club. LEE TRUNDLE certainly falls into that category. He was allegedly labeled too fat by Mark Wright and probably remembered more for the miss at Barrow than his football whilst at Southport but it hasn’t held him back. Born in Huyton on 10 October 1976, Trundle was a crowd pleaser but his apparent lack of desire in training would not have gone down well with Wright. He left for Rhyl as a free agent and without any sell on clause in his contract not only did we lose a player who turned out to be one of the best strikers outside the Premiership but we were also left empty handed. Has scored some stunning goals for both Swansea City and Bristol City since he found his fame and fortune. Also makes regular appearances on Sky’s Soccer AM. His close control, dead ball expertise and eye for goal have seen scouts from Premiership clubs flocking to Swansea and Bristol but nobody has bitten the bullet to elevate him into the Premiership. Considered a “Legend” whilst at Swansea he was hugely popular off the pitch as he was always the last player signing autographs and spent time watching the local kids playing football. He had time for everyone he met and that has continued at Ashton Gate. Scored a stunning goal in the 2007/08 Play Off Semi Final for Bristol City.
Here is how The signing of Lee was first reported on Port Online:

Southport Football club have given the fans just the Christmas present they have been waiting for - A Striker. Lee Trundle today signed a 2 1/2 year contract after signing from Stalybridge Celtic for an undiclosed FIVE FIGURE fee. Nearly two years ago Trundle played one game for Southport reserves in a one match swap deal for a defender. Trundle scored a hat-trick for Southport on that day but then returned to his club. Today Futcher has finally ended his long search for a top class striker. Trundle has already fired in 14 goals so far this season for Stalybridge Celtic and joins Jim Dobbin in the running for a place in Saturday's line up against Barrow.
Earlier in the week Striker Neil Morton from Barrow pulled out of a possible move to Haig Ave, after the two clubs had agreed a fee, but Trundle's arrival is a huge sigh of relief. Dobbin on the other hand signed on loan last week but a car accident on the motorway prevented him from playing any part in the game against Kidderminster.