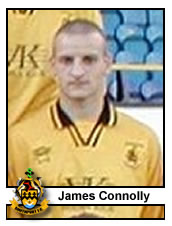 When James Connolly left Southport in 2003, few would have expected his next game for the club to be as captain. After five excellent seasons with Marine, however, the strong central defender returned in the summer as a focal point of the new squad. A former regular in the Sandgrounders reserve team, his time with Marine saw him develop the quality which led Liam Watson to table an unsuccessful transfer bid in his first stint as Port boss. James, 27, was one of three players to join Southport after spending only the close-season at Burscough.