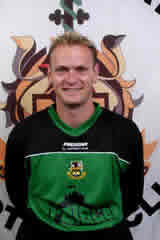 When \\\"Dicko\\\" made his debut against Woking on 14 August 1999 little did we know what a legend he was to become at Haig Avenue and how he was to redefine records along the way. 283 matches on from the 4-1 triumph on his debut, stats that ensure a unique niche within club annals for the man with the Sandgrounders\\\' highest number of Non League appearances who, in 2002, also set a new precedent for the most consecutive starts. Dicko\\\'s stature as one of the most distinctive servants to have represented Southport stretches far beyond the constraints of the record books. An integral part and the outstanding performer in everything the Sandgrounders have done since 1999, the Haig Avenue number one was a terrace hero.

Synonymous with great saves and superhuman consistency, his ability to bail out those in front of him became more of an expectation than a rare moment of match-saving magic, and also provided the catalyst behind the success that brought the need for full-time football.

Serving Southport from the top of the Football Conference to the depths of the Northern Premier League, Dickinson was a consummate team player, an unassuming hero, whose place in Haig Avenue hearts stemmed from regular shows of superb agility, dependability and, of equal importance, a commendable loyalty.

Having defied modern trends by remaining with Southport on relegation to regional football in 2003, the success of the player with just thirteen absences to his name also provides a splendid reminder of what can be achieved with commitment and integrity: attributes that serve to underline his popularity.

Twelve months prior to losing our Conference status in 2003, Dickinson made Southport history by accumulating an incredible 126 back-to-back starts - a record spanning three campaigns and ended only by suspension. As well as sweeping the board in 2005/06 for a familiar collection of annual awards, he also assumed the mantle of record appearance-maker since 1978 having graced 264 matches in a Sandgrounders\\\' shirt - surpassing the previous accomplishment of David Gamble.

On his arrival from Guiseley, Dickinson had big gloves to fill and when he immediately overthrew the inimitable Billy Stewart, not many could have envisaged the measure of the achievements which have since materialised.

There were also moments when the art of goalkeeping has become too routine for Leeds-born custodian: The \\\"highlight\\\" of his up-field ventures arguably arriving against Rushden and Diamonds in 2001, when an attempt to outsmart the division\\\'s deadliest strike-force didn\\\'t quite follow the script.
Before joining Southport Dicko played for Bradford City and Guiseley who he re-joined upon leaving the club.
Towards the end of the 2007/08 season Dicko enjoyed a spell at Hucknall Town on loan where he picked up three Man Of The Match awards in only a handful of appearances.

His best moments at Haig Ave were winning the Conference North and the match at Grays that saw us gain the point we needed to stay in the Conference.

A plasterer by trade he was unable to go full time because of work commtments and left at the start of the 2006/07 season to the disappointment of his army of fans. Dicko was held in such high esteem by all the supporters that his departure caused a furor never seen before and some say his leaving was in part the catalyst to the anti-Paul Cook feeling at the club.

Dickinson sits fifth in the all-time standings behind Football League players, Arthur Peat(401), Alex Russell (346) Billy Halsall (334) and Tommy Sinclair(320). According to the stats, he played under six managers and alongside 114 different team-mates at Haig Avenue. Many of those players have contributed significantly and memorably during the journey towards full-time football - but while stars arrive and fade, legends last forever.

A supreme team player, the former Bradford City apprentice endeared himself closely to the Southport faithful by continually producing saves of the highest order. 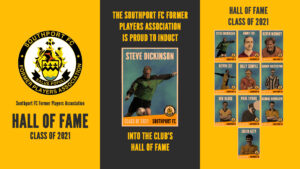