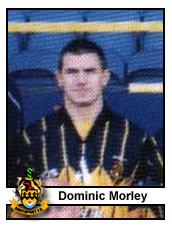 Returned to the club as coach upon their return to the national Conference. Signed forms as cover.