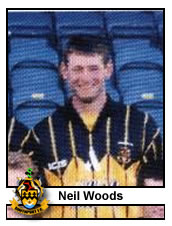 He signed for Rangers on the 22 December 1986 for Ł120,000 from his team he started his career with Doncaster Rovers, then after making only three substitute appearances he signed for Ipswich Town 3 August 1987 for Ł120,000, he then spent three seasons there before being able to sign for Bradford City on a free transfer. On the 23 August 1990 he signed for Grimsby Town for Ł82,000 were he had a successful eight year stay and were later he would become the youth team coach. Also whilst at Grimsby Town he was loaned out to Wigan Athletic, Scunthorpe United, Mansfield Town for short spells. He later had short spells with York City and Southport before ending his career with Gainsborough Trinity.
In 2003 Woods was appointed Youth Team manager at Grimsby Town, after Paul Wilkinson left the position in order to move to Cardiff City. A number of players have made the first team grade after promotion from Neil's youth side. Danny North and Peter Bore are two products of the Grimsby youth side that have enjoyed lengthy spells in the first team, while Welsh International striker Cameron Jerome spent time under Woods before moving on to other clubs.