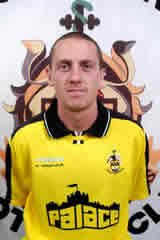 Chris made 155 league appearances with 4 subs. He scored 7 goals and is one of a very exclusive club to score on their Southport debuts finding the back of the net in a 3-1 home defeat by Rushden & Diamonds. Chris had two spells at the club initially being brought to the club by Mark Wright from Hereford United. Laney, as he was affectionately known, was a player who always gave 100% and his commitment in the tackle saw him pick up a fair few yellow cards (and red) in his time at the club. Chris was at Everton as a youngster. After leaving Southport the first time around Chris played for Leigh RMI and Morecambe and since leaving at the end of the 06/07 season he has been with Altrincham. In his final season at Haig Avenue he was the only part time player in a full time team and had to leave as this was affecting his starting place.
Lane signed as a YTS trainee with Everton in 1995 and was a reserve team regular whilst at Goodison Park. He attended Everton's Centre of Excellence from the age of 9 and became captain of both the Liverpool Boys and Merseyside Schools teams. After two years in Everton’s reserve side Chris was given a premiership squad number for the 1997/98 season but was ultimately unable to break into the first team.
He left Everton and joined Hereford United for the start of the 1998/1999 season where he established himself as a fan favourite at Edgar Street. Lane notched up over 50 appearances for The Bulls and scored five goals during his time there.
His impressive form for Hereford persuaded Southport manager Mark Wright to pay Ł12,000 for the right back’s services and he would represent three managers during his first spell with the club (Mark Wright, Phil Wilson and Mike Walsh).
Weighing in with a number of important goals in his time, he was another member of the FA Cup giant-killing side that faced Notts County in front of the Match of the Day cameras. Lane in fact capped off a fine day all round by scoring Southport’s fourth goal with a superb long range effort and his celebrations saw out the closing minutes of the television institution that evening. Chris describes this as his most memorable moment whilst playing for the club. It was a marvellous goal but we could have done without the shirt removal after it that left the watching Match Of The Day millions gasping in horror!
Having experienced the highs of the Notts County game, Lane was to ultimately become part of the side that experienced relegation that very same season. He had attracted the attention of a number of clubs over the course of the year but he drew much criticism from the Southport support being seen to jump ship where Syd Pickford and Steve Dickinson had vowed to help the Port fight back from the NPL. Morecambe manager Jim Harvey had moved quickly to ensure that Lane became his first summer signing but within 6 months, the emergence of youngster Keiran Walmsley forced him out of the first team. He struggled to regain his place and was released in January, completing a move to strugglers Leigh RMI.
He spent little over a month with Leigh before becoming part of a swap loan deal (striker Steve Brodie and defender Jamie Beard going the other way) and he moved to Conference leaders Chester City to team up once again with former boss Mark Wright. During his four months with Chester they clinched the Conference title, although Lane’s opportunities were limited to a handful of appearances.
He returned to Leigh that summer and was installed as club captain spending much of the season as at centre half. After Leigh suffered relegation Liam Watson stepped in and brought him back to Southport in time for our first season back in the Conference (2005/2006). Lane’s battling performances that season meant that he was able to regain the respect of much of the Southport support following his earlier exit.
With Southport’s Conference future assured the club had made the decision to move to full-time football for the following campaign. Lane opted to remain as a part time squad member, often training with Conference North club Vauxhall Motors in order to maintain his fitness levels. New Southport manager Paul Cook, unable to arrest Southport’s poor form at the start of the new season began to omit Lane from his starting line up by the end of September much to the fans’ bemusement. Had his replacements been of sufficient quality the decision might have been more widely accepted, but fans protested at an away game at Altrincham and Cook was met with angry supporters following the game suggesting that Lane had been used as a scapegoat for the clubs poor results. Lane’s performances certainly hadn’t been poor but they hadn’t been outstanding either. In truth, the majority of the team was under qualified.
When Cook ultimately lost his job in January, he was replaced by former England international Peter Davenport. Lane, by this time back in the side, was once again the regular right back, but the new man brought with him a number of replacements including right back Mark Birch on loan from Gretna. Results began to improve and Lane struggled to regain his place. Lane’s part time status was blamed for his exclusion from the squad, but that argument fell foul as his replacement was not with the Southport squad on a full-time basis either, travelling down for matches only.
Southport’s brave fight against relegation was lost just one week from the end of the season and following the club’s relegation Lane once again left, joining part time Altrincham back in the Conference.