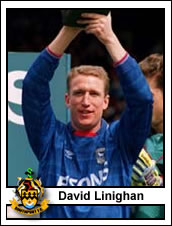 He played as a centre-back. He is one of three footballing brothers, the other two being Andy and Brian.

Linighan began his career at Hartlepool in 1982 as a 17-year-old. He remained at Victoria Park for four years, making close to 100 league appearances for the club.

After a brief spell at Derby County in 1986, he joined Shrewsbury Town for a Ł30,000 fee. In two years with the Shrews, Linighan made 65 league appearances, scoring one goal.

Linighan joined Ipswich Town in 1988 for Ł300,000, and it was at Portman Road that he would spend the majority of his career. In eight years, he made 277 league appearances, netting twelve goals.

In 1995, Linighan was signed by Sam Allardyce to shore up Blackpool's defence. He played under three managers during his three years at Bloomfield Road, the others being Gary Megson and Nigel Worthington, chalking up five goals in a century of league appearances.

Scottish club Dunfermline Athletic came in for the defender's services in 1998, and he moved north of the border for what proved to be just one game. During his time with the Pars, he was loaned to Mansfield Town, whom he would join on a permanent basis in 1999.

In 2000, Linighan moved into non-league football with Southport (2000-01) and Chester City (2001), before a short spell with Hyde United prior to his retirement.