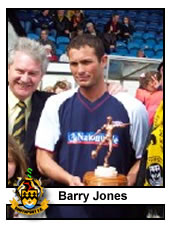 112 Games, 3 subs and 4 goals between the 2001/02 and 2003/04 seasons.
On Liverpool’s books, obtained from Prescot Cables for a Ł500 donation, and made one sub appearance for Liverpool in the UEFA Cup against Kuusysi Lahti in October 1991 replacing David Burrows in the 22nd minute of the game. The Liverpool team that night was, Bruce Grobbelaar, Gary Ablett, David Burrows, Steve Nicol, Mike Marsh, Steve Harkness, Ronny Rosethal, Steve McManaman, Ian Rush, Mark Walters and Steve McMahon.
Barry went on to play 184 times for Wrexham between 1992 and 1997 before moving to York for a Ł40,000 fee where he made 127 appearances. Managed to score 11 goals in the Football League. Made his debut for Southport at the start of the 2001/02 season and went on to make 36 full appearances scoring 3 goals. The following season was a difficult one but Barry played in 40 of the games. He stuck with the club after relegation and made a further 36 starts in 2003/04 scoring just one goal in the 3-0 home win against Whitby. Released by Liam Watson at the end of the 2003/04 season, Barry went on to play for Runcorn, Prescot Cables and Bangor City.
Profile Reproduced with the kind permission of Trust In Yellow from The complete Non-League History of Southport Football Club 1978-2008