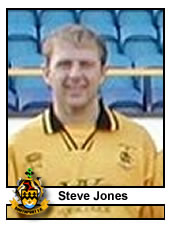 Original Port Online Player Profile:
Steve was STALYBRIDGE CELTIC'S leading goalscorer in their championship season and is a versatile player, equally at home in midfield or attack. He started his career with his home town club STOKE CITY and has also had spells with STAFFORD RANGERS, EASTWOOD HANLEY and LEEK TOWN