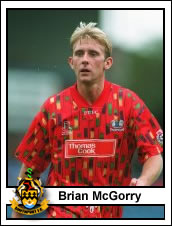 McGorry began his career as an apprentice with Liverpool, but on failing to make the grade joined Weymouth, who he left to join Bournemouth for a fee of Ł30,000 in August 1991. He played 61 times for the Cherries before a Ł60,000 move to Peterborough United in February 1994. Although a regular in the Posh side, he left to join Wycombe Wanderers on a free transfer in August 1995, but struggled to settle into the first team, making only four appearances (all as substitute) in nearly two seasons.

He joined Cardiff City on loan in March 1996, and left Wycombe to join Hereford United on transfer deadline day in March 1997 to strengthen a weak midfield. Hereford were relegated at the end of the season, but he remained at Edgar Street during their first season in the Conference before moving to Torquay United on a free transfer in July 1998. He played 34 times the following season, but was released by Wes Saunders and joined Telford United in August 1999. He settled in well at Telford, and was made club captain of a side including another former Torquay player Simon Travis. He remained part-time when Telford went professional, his commitments as a personal trainer ruling out a return to full-time football. On the 17th of July 2001 he left Telford on a free transfer to join Southport.

He had a spell on loan with Woking and in January 2002 joined his former Southport manager Mark Wright at Chester City. In May 2002 McGorry was transfer-listed by Chester and was released by mutual consent in July 2002. He joined Tamworth that August. In July 2003 he moved to Nuneaton Borough as player-coach. He was transfer-listed in October 2004 and was released in May 2005.
In January 2006 he joined the coaching staff at Vauxhall Motors.

Since retiring from professional football, McGorry started his own business in his native Liverpool. He is the founder member and owner of a company called Executive Personal Training.