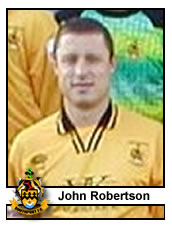 Original Port Online Player Profile:
28 year old John signed last summer from NORTHWICH VICTORIA He is a vastly experienced centre half who started his carreer as a YTS player wth WIGAN ATHLETIC and graduated to the league side making 108 appearances between 1992 & 1995. John then had a 2 year spell at LINCOLN CITY making a further 38 appearances.