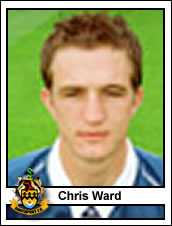 Hailing from the Preston suburb of Ashton-on-Ribble, Ward began his career with local sides Springfields and Fulwood Amateurs whilst studying at Ashton-on-Ribble High School and Preston College before signing for Lancaster City at the age of 18. Ward quickly made an impression at Lancaster, scoring on his full debut in the 2-0 away victory over Winsford United on 24 August 1999. A deluge of goals for Lancaster attracted the attention of scouts and on 24 April 2001 Ward agreed to join Birmingham City for Ł25,000; his contract would officially begin at the start of the 2001-2002 season.

Ward failed to make the first team at Birmingham and in October 2001 he joined Forest Green on a months loan, making his debut in the 2-2 home draw with Northwich Victoria on 29 September 2001 and scoring his first, and only, league goal for the club a week later in the 5-1 away defeat to Doncaster Rovers. In March 2002 he joined Southport, again on loan, debuting in the 3-2 home defeat to Boston United on 1 April 2002.

Released by Birmingham at the end of the season, he joined Barrow, making his debut in the 1-1 home draw with Hucknall Town on 17 August 2002 and scoring his first league goal for the club in the 1-1 away draw with Runcorn on the following Tuesday. Ward's time with Barrow would be brief as after just a month with the club he signed for Leigh R.M.I.. After making his debut in the 1-0 away defeat to Farnborough Town on 21 September 2002, Ward notched his only league goal for Leigh in the 2-1 home victory over Stevenage Borough before returning to the Football league with Lincoln City.

Released by Lincoln at the end of the season, he linked up with Northwich Victoria then Bamber Bridge. Moves to Kendal Town and Mossley followed. He moved on to Clitheroe, scoring on his debut in the 3-1 home defeat to Bradford Park Avenue on 6 January 2007. Teaching commitments caused Ward to miss most of the 2007-2008 season but he resumed his Clitheroe career at the start of the 2008-2009 season. In November 2008, Ward linked up with his one-time Lancaster City manager Tony Hesketh at Chorley, debuting in the 3-1 away defeat to F.C. Halifax Town on 15 November 2008. Hesketh departed the hot seat at Chorley to return to Lancaster City and Ward was one of five players who followed him from Chorley to the Giant Axe based club ahead of the 2009-2010 season