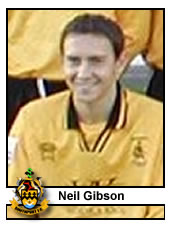 Original Port Online Player Profile:
Neil is a former Welsh U21 International and joined the club this summer having been released by SHEFFIELD WEDNESDAY earlier. 22 year old Neil made his football league debut with TRANMERE ROVERS and has rejoined his previous coach , manager Phil Wilson, by signing for Southport