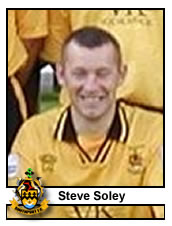 Original Port Online Player Profile:
Steve started his career with LEEK TOWN, moving to PORTSMOUTH for Ł30000. A goalscoring mid-fielder, Steve moved to CARLISLE after a short loan spell at MACCLESFIELD. Phil Wilson moved quickly to sign Steve this summer and he has been made team captain for this campaign.