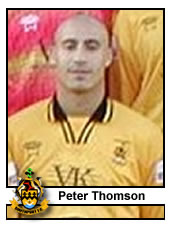 He joined Lancaster City on his release in the summer of 1997 and made an immediate impact in the UniBond League and his impressive scoring form earned him a move to Dutch side NAC Breda for a five figure fee.

He made five top team appearances for the Dutch side without scoring before joining Luton Town in 2000.

In two seasons at Kenilworth Road he made 11 League appearances, scoring twice and he also played 2 League games whilst on loan at Rushden & Diamonds, scoring once.

He had a brief spell with Morecambe before joining Southport in July 2002. He returned to Lancaster City in December 2003 and enjoyed further success before joining Stafford Rangers in the summer of 2005. He joined Barrow in June 2007 but was released in September without scoring a competitive goal.