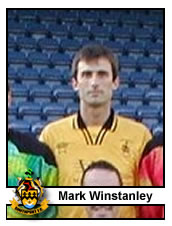 Original Port Online Player Profile:
Mark is one of Phil Wilson's major summer 2002 signings and is a highly experience left-sided centre back. He has moved to Haig Avenue from CARLISLE UTD, having had. previously, a short spell with SHREWSBURY TOWN. Mark has also made 265 appearances foe BOLTON WANDERERS & another 139 for BURNLEY