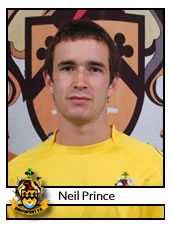 Neil started as a youth with Liverpool, during which time he represented England, before moving into the reserves for 2001. On his release, he joined Torquay United at the start of the 02/03 season. It was difficult to break into the first team, and after three starts and four sub appearances over the course of the season, he joined Southport in January 2003. One sub appearance for the sandgrounders saw Neil opt instead to join Leigh RMI to see out the 02/03 season, where he appeared regularly until the end of the season. At the start of the 03/04 season, he joined Lancaster City under Phil Wilson, and was ever present for the Dollies over his two year stint, but scoring only twice. At the end of the 04/05 season, he was out of contract, and elected to join Celtic after impressing during an excellent pre-season display. His stint at Celtic was initally just one season, during which time he bagged fourteen goals (all of them sensational). At the end of the year he wanted full time football, and left Celtic. When full time football was not on the cards, he spent a month at near neighbours Hyde United, before realising where his heart lay, and returned to Celtic. A disappointing season followed, with Neil never reaching his previous form, and he took the offer of full time football at Southport. After a season in which he helped Southport into the play-offs his contract was not renewed and he joined Manchester side Droylsden.

Catching up with Neil Prince