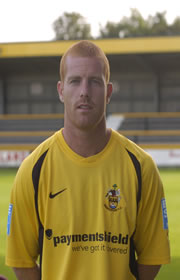 Many will agree that Steve was one of the most sorely missed players following the mass departure brought about by the switch to full-time in 2006. A former Everton youngster and Wigan trialist (two-week trial at Wigan Athletic after impressing for Ormskirk amateurs, Birchfield), he joined Southport in November 2003 from Runcorn FC Halton, bagging a hat-trick in the Conference North title-winning match in 2005. Steve, a powerful striker, netted 12 goals in the Conference Premier, maturing into a key performer, before joining Droylsden, where the 27-year old was again promoted to Non-League’s elite. He returned to Haig Avenue via a summer at Burscough.