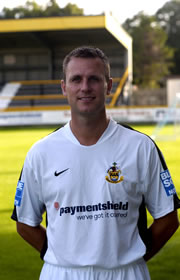 The captain of Southport’s Conference North championship-winning squad of 2005, Chris now combines his playing duties with the role of assistant manager. A midfielder of vast experience, he was one of Liam Watson’s first signings as manager in 2003 and lists Everton, Wigan Athletic and Oxford United among his former clubs. The 32-year old also played in Norway for Moss FK, prior to stints at Chester City, Marine, Morecambe and Runcorn FC Halton, before joining Southport. A brief spell at Stalybridge Celtic was followed by a return to Haig Avenue and time at Burscough.