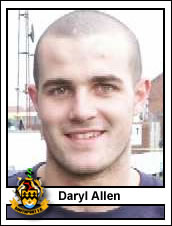 Former captain of Southport's reserve side he made the step up from the club's PASE scheme.