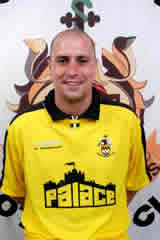 Jerome is a pacey left sided player, who started out with Morecambe\\\'s Youth team, before moving into League football with Darwen in the North West Counties League. In the summer of 1998, he moved to Rossendale United, whom he helped to the promotion into the Unibond First division in the 2000/2001 season. He was selected to play for the British Universities squad, at the start of the 2003/4 campaign, playing for his country in South Korea, missing the first three weeks of the season.
Jerome signed for Stalybridge in Febuary 2004 before a move to Conference side Accrington Stanley in March. Although he was offered a full-time contract at Stanley, he opted for part-time Southport because of his University studies