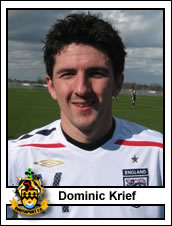 His footballing career started in the Leeds United academy before being released at the end of the 2003/04 season. He then joined Harrogate Town in the Conference North in 2004. Impressing Southport manager Liam Watson he signed for the Sandgrounders in time to start the 2005/2006 season. Due to problems with travelling he joined Farsley Celtic in the middle of the season and helped them get promoted into the Conference North.