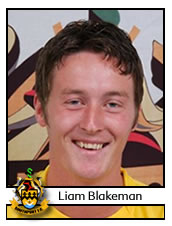 Signed from Burscough by manager Liam Watson mid-way through the 2005/2006 season, Liam made an immediate impression and was a key part of the side that kept Southport in the Conference that season.
Liam stayed with the club following the transition to full-time football. Relegation in 2006-2007 saw Blakeman drop into the Conference North and it was Blakemans heart-breaking penalty miss in the play-off semi-final the following season that ended Southport\\\'s dreams of an immediate return.
He gave up a full-time contract at Southport to move to the AFC Telford in the summer of 2008. After a difficult first season, he won over the supporters and picked up the supporters player of the year accolade the following term. At the end of his contract he rejoined Southport and manager Liam Watson upon their promotion back to the top flight of non-league football.