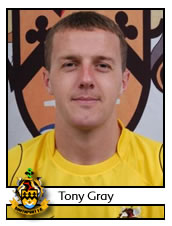 In April 2008 Tony wrote his name into the Haig Avenue archives by setting a new club record of scoring in eight consecutive league matches. Having endured a lean spell during the middle of last season, the striker hit a breathtaking run of form to help fire the Sandgrounders into the Conference North play-offs, ending the campaign with a creditable 19 league goals. The 26-year old signed from Burscough in 2006 after finishing the previous season as the Northern Premier League’s leading marksman, scoring 33 times. He had previously played for Newton and Bangor City.
When Liam Watson rejoined the club as manager in 2008 he brought with him the leagues leading marksman Ciaran Kilheeney. As part of a Ł30,000 transfer swoop on his former club Burscough Southport had to re-coup some of the outlay and Tony Gray was one the unfortunate player to make way joining Droylsden for Ł7000. Watson admitted later that letting him go was a mistake and little over two years later re-signed him from Droylsden with Kilheeney going the other way.