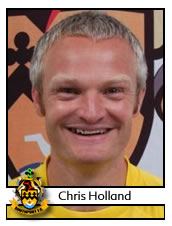 Holland started his career as a trainee at Preston North End in 1993, making just one league appearance as a substitute before signing for Premier League club Newcastle United on 20 January 1994 for a fee of Ł100,000. However, an eye injury sustained during an ammonia attack left him with partial sight effectively ruining his top flight career and he joined Birmingham City on loan on 3 September 1996. The loan was made permanent in October 1996 for a fee of Ł600,000. He played over 70 games during his three years at the club.

On 3 February 2000 Holland joined Huddersfield Town for a fee of Ł100,000, where he scored the first goal of his professional career, a winner against Nottingham Forest on 21 March 2000.

He played regularly for three seasons, but when told by manager Peter Jackson that a new contract would not be offered at the end of the 2003-04 season, he chose to join League Two club Boston United in March 2004 where he made 85 league appearances.

After two years playing regularly, he signed an 18 month contract with Conference Southport on 31 January 2007 on a free transfer, nearer his Lancashire home.
Despite Southport's relegation to the Conference North at the end of the 2006–07 season, Holland agreed a new contract and was appointed club captain. Holland was a vital part of the Southport side in the 2007–08 season. He scored his first goal for the club at Hyde United with his next goal coming three weeks later in Southport's 3–1 victory at his old club Boston United.

Holland is a former England youth and Under 21 international. He won the first of his under-21 caps while at Newcastle.

Published Date: 23 February 2007 By Tony Dewhurst Chris Holland is a purposeful and courageous man. When he strides across a room for an appointment, you half expect him to break into a run, nutmeg you and charge head-first through the door. He looks sturdy and strong, and it is 13 years since he